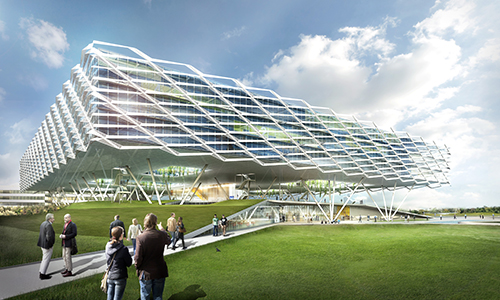 The development of adidas ‘World of Sports’ is based on a masterplan that has been continuously updated and supplemented in recent years. Currently, a new office and reception building is to be built as a further element. The four-story building that marks the beginning of the southern campus will be given a special identity and significance, as it will serve as the main entrance for visitors and guests to the ‘World of Sports’ in future.

In other words, it will be a building that allows adidas to be architecturally visible beyond the borders of the campus.The architectural concept is based on a finely-tuned interaction between transparency, landscape and the world of work. A progressive working world aimed at encouraging an interdisciplinary and communicative cooperation, one that responds to future developments. The new office building hence resembles a highly flexible organism, which can be adapted to suit new working processes and employee wishes. The office unit and hence workplaces with a rigid and fixed allocation will be a thing of the past.The design draft proposes a modelled ‘built landscape’ on the ground floor, through which the visitors and guests will enter the open zones of the ‘World of Sports’. On the three levels above, which seem to hover, the working areas for approx. 2000 employees are presented.

These are scattered across the three stories in a flexible and alterable matrix, according to a well-structured grid, that can however be used as desired. Differentiated working areas are grouped around different-sized atriums that have been optimized to enhance daylight entry.An air space links the three workspace levels, allowing for visual links between them. On each of the levels, adjacent to these work zones, are so-called decentralized hubs, which form the central core of the world of work, the focus of communication and encounter, a playing field where employees can meet and exchange ideas and information. Galleries and stairs link the central places, like in a city.

Here, it is possible to meet, discuss and be inspired by a different environment. Along the outer façade, galleries and open stairways supplement the perpendicular connection between the individual areas, which can hence be both horizontally and vertically combined and interconnected.In order to support the sculptural concept of the building structure and implement the ecologically sustainable aspects of the daylight optimization and shading, a custom-made sun protection is planned. It will be fixed to the outside of the building, according to the respective orientation of the façade. As a result, a large number of complex parameters for different positions of the sun at various times of the year and day can be taken into account.